A woman who travelled from Melbourne to the Sunshine Coast while the Victorian capital was in lockdown has tested positive for COVID-19, Queensland’s Health Minister Yvette D’Ath has confirmed.

Victoria’s lockdown had already started by the time the woman left Melbourne.

The woman is staying with her husband and other family members in Caloundra and was tested yesterday, with a positive result confirmed today, Ms D’Ath said.

She is currently being interviewed and Queensland Health has released an initial list of exposure sites.

Testing clinics on the Sunshine Coast will be open for extended hours and Ms D’Ath has urged people to get tested.

“We do have a number of sites already in areas like Goondiwindi and Toowoomba,” she said.

“If you have been to one of the exposure sites, whether you have symptoms or not, we would like you to come forward and get tested.”

The woman had crossed the border into Queensland at Goondiwindi.

Chief Health Officer Jeannette Young said the woman had been to “quite a few sites”, both in southern Queensland and through New South Wales.

“If you’ve been to any of these exposure sites that this lady has been at, please come forward and get tested, whether or not you’ve got symptoms,” Dr Young said.

The exposure sites include the Goondiwindi McDonalds and a Caltex super petrol station in Toowoomba on June 5.

The woman then visited Sonny’s at Moffat Beach on the Sunshine Coast, Coffee cat at Kings Beach on June 6.

On June 7, she visited the Stockland shopping centre at Caloundra and attended the Coffee Club at that precinct.

She also shopped at the Stockland Kmart and Bunnings in Caloundra and Kawana Shopping World on June 7.

On June 8, the woman was at an IGA in Caloundra and the female toilets near the IGA.

“These are just initial sites — we’ll be getting more sites as we talk to the lady,” Dr Young said. 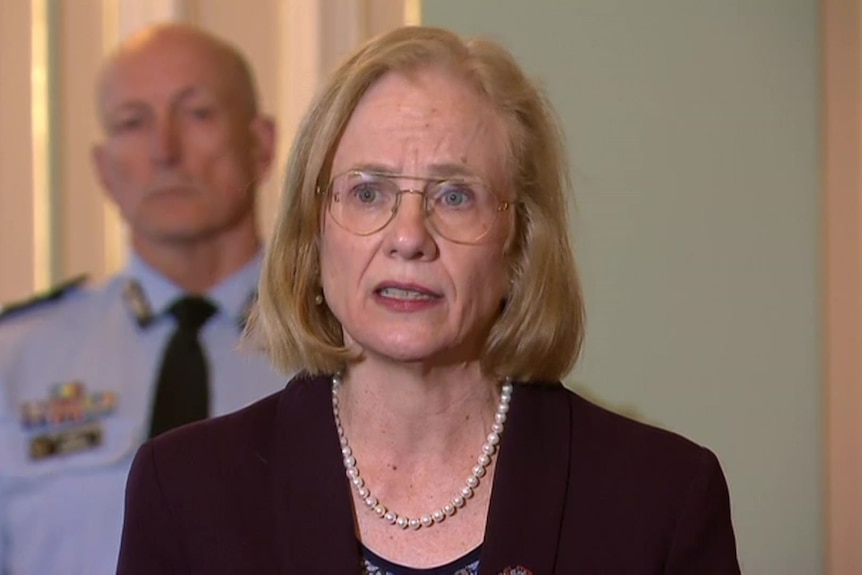 NSW Health authorities have also issued alerts for a number of regional centres after the woman stopped in Forbes, Dubbo, Moree and Gillenbah.

Venues visited include a cinema, cafés, a pub and thermal baths.

Dr Young said the woman’s husband had been admitted to the Sunshine Coast University Hospital as a precaution in case he also eventually tests positive.

“He’s spent a lot of time with her in the car of course, so I’m quite concerned that he has been exposed and could become infected,” she said.

The woman developed symptoms on June 3 and Dr Young said she could have been infectious since June 1.

Deputy Commissioner Steve Gollschewski said Queensland police would investigate how and why the woman entered the state.

“We’ve got a couple that have come from Victoria, when Victoria’s in lockdown, into Queensland,” Deputy Commissioner Gollschewski said.

“We’ll examine all those issues around passes — whether they were appropriate and what has happened — it is too early to say. “It’s really important for us to remind the whole community that we cannot possibly check every single person moving around the country.

“We rely on the community to do the right thing.

“At this stage we’ve seen someone come into this state when they’re positive with COVID.”

He said a failure to comply with the Chief Health Officer’s directive could result in court action.

Stay up-to-date on the coronavirus outbreak

Restrictions to ease on Friday

The latest COVID-19 case was announced as Ms D’Ath also revealed Queensland would ease restrictions on Victoria from 1:00am this Friday, limiting the hotspot declaration to Greater Melbourne.

That will mean Victorians outside Greater Melbourne will be free to travel to Queensland without quarantine restrictions.

Dr Young said she was not concerned about the State of Origin game in Townsville tonight.

She said Queensland would not be going into lockdown in response to the latest case.

“The best way to work out what the risk is, is for people to come forward and get tested,” Dr Young said.

Ms D’Ath said the case was not considered community transmission as it was not acquired in Queensland.

“She hasn’t passed it onto anyone as yet,” Ms D’Ath said.

“Hopefully, we have got this early and hopefully there are no other positive cases and there is no other local transmission — it’s very early.”