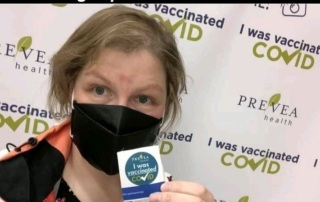 As we reported last week, the mass vaccination campaign in the U.S. with experimental COVID-19 shots is now targeting educators, after first targeting nursing home residents and healthcare workers.

We have already reported about several deaths among professional educators, and sadly, The COVID Blog now brings us another case where a teacher died very shortly after receiving an experimental COVID-19 injection.

GREEN BAY — A 40-year-old music teacher is dead four days after publishing a Facebook photo wearing a mask and hold an “I was vaccinated” sticker.

Wisconsin educators became “eligible” for experimental mRNA and viral vector shots on March 1, according to the state’s Department of Health Services. Ms. Sara Holub received one of the experimental shots at the Kress Events Center, University of Wisconsin Green Bay, on March 22.

It is unclear whether she received a Pfizer or Moderna mRNA shot, or the Johnson & Johnson viral vector shot. Ms. Holub received the shot via Prevea Health. The organization is holding mass inoculation events across the state. It received its allocation of experimental shots for educators on March 16. Prevea is affiliated with the nonprofit Hospital Sisters Health System.

The company spoke about people’s “diligence and excitement” to receive the experimental shots on March 22.

Ms. Holub was one of those people. She posted that day on Facebook, “it’s been a ridiculous year, but better days are coming.” She proudly and publicly conveyed her excitement to the world.

Ms. Holub died four days later, according to her obituary.

The Facebook “vaccinated” post has since been removed from her timeline. As we’ve covered extensively, “vaccines are the leading cause of coincidences.” Ms. Holub’s obituary says she died of natural causes. Of course there is no mainstream media coverage of her death. And even if there were, it would entail canned talking points, starting with “her death is not related to the shot.”

Ms. Holub was a music teacher at JR Gerrits Middle School and Pulaski Middle School in Kimberly, Wisconsin. She fulfilled a lifelong dream of being a contestant on Jeopardy!.

Read the full article at The COVID Blog.