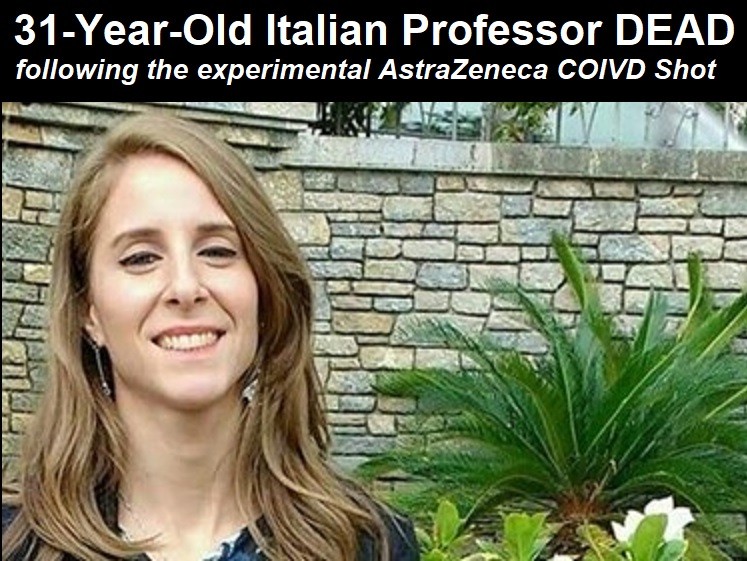 ISCHIA, ITALY — AstraZeneca continues its crimes against humanity as yet another young victim dies from blood clots.

Mrs. Ilaria Pappa was a professor at Istituto Statale D’ Istruzione Superiore Cristofaro Mennella (“Menella Institute”). She received the first dose of the Oxford-AstraZeneca viral vector shot on February 28, according to IlGolfo24.it. Everything seemed fine until she got ill two weeks later. The 31-year-old professor went to Cardarelli Hospital on March 16. Doctors worked tirelessly to figure out what was wrong.

Her condition worsened on March 18, prompting a transfer to the neurosurgery ward at Neapolitan hospital. She was placed into a medically-induced coma on March 20 after suffering a ischemic stroke. But it was too late. She died just after 10 p.m. Tuesday night. The school announced the death via Facebook.

Doctors said she developed a . Note anytime you see the word “embolism,” that means blood clots. The Oxford-AstraZeneca shot has been suspended in numerous countries. It’s unclear why it’s still on the market at all. Several people have died in Italy after the AstraZeneca shots.

Mrs. Pappa was married to Salvadore Meglio, who is also a professor at the school.

The British-Swedish pharmaceutical firm is now playing word games to justify all the deaths and illness. The company revised its drug information.

The shots are now 76% effective against COVID-19, not 79%. It also maintains that blood clots are “rare.” The Europeans Medicines Agency says the shots are safe. Meanwhile the World Health Organization says the benefits outweigh the risks. The empirical evidence says otherwise. Stay vigilant.

Read the full article at The COVID Blog

Italy has the highest number of adverse events following the AstraZeneca shots of any other country in Europe, according to the European database of suspected drug reaction reports, EudraVigilance. Story here.