Ignorant, backwards, unscientific, religious fanatics: This is how the western corporate media presents Pakistanis who don’t like vaccines produced in western countries.

I have covered their resistance to vaccines for over a decade now, and I view them very differently. They are perhaps one of the most knowledgeable and intelligent people anywhere in the world when it comes to understanding the dangers of vaccines.

Sadly, what they have learned about vaccines has come from experience, and not from watching talking head “experts” in the western media, mostly owned and controlled by Big Pharma.

They don’t care too much for Bill Gates and his “philanthropy” and “free” vaccines to supposedly make their lives better.

They’ve been on to him for years, and his eugenicist population control plans, long before COVID fearmongering invaded the planet last year, and when all of a sudden multiple documentaries about Bill Gates and his vaccine empire all of a sudden started appearing everywhere.

The anti-Big Pharma Pakistanis are perhaps the best example of “vaccine resistance” the world has seen during the past decade or so, as they fight against the odds by going up against the western military industrial complex and their weaponizing of vaccines, all in an effort to protect their families and children. 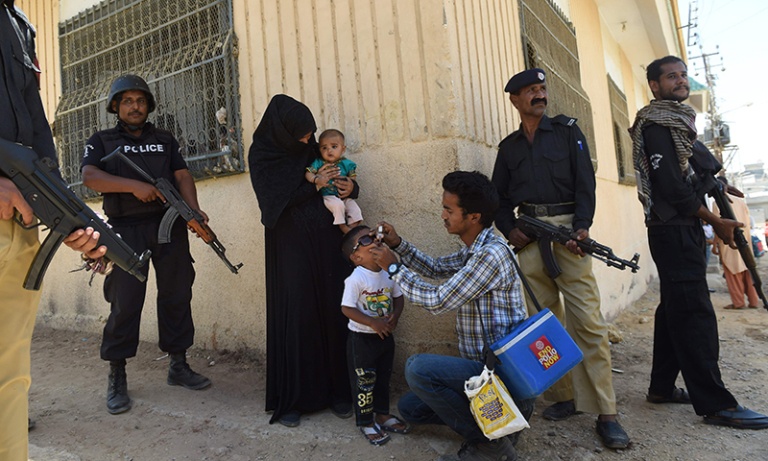 Mass public vaccination campaigns in recent years in Pakistan have required armed soldiers to accompany health workers, so strong is the opposition against western vaccines. Photo by Asif Hassan/ AFP.

In 2014 the Obama Whitehouse admitted that the CIA used a fake vaccination program in Pakistan to collect DNA and to find and kill Osama Bin Laden.

Here is the Press Release from then, originally published by Reuters.

WASHINGTON (Reuters) – The White House promised on Monday that the CIA will not use immunization programs for its operations following a complaint that the spy agency used such a campaign in its hunt for Osama bin Laden.

The deans of 12 public health schools had complained about a reported vaccination program conducted by a Pakistani doctor, who used a hepatitis immunization survey in the Pakistani city where bin Laden was later killed in a secret U.S. mission.

The CIA orchestrated the survey to try to obtain fluid containing DNA from relatives living near the bin Laden residence, the Washington Post reported. It said the effort failed and the surgeon, Shakil Afridi, was sentenced to 23 years in prison.

Caitlin Hayden, spokeswoman for the White House National Security Council, said Obama homeland security adviser Lisa Monaco had assured the deans in a letter that CIA policy as of August 2013 makes clear “the CIA will make no operational use of vaccination programs, which includes vaccination workers.”

“Similarly, the agency will not seek to obtain or exploit DNA or other genetic material acquired through such programs. This policy applies worldwide, and to U.S. persons and non-U.S. persons alike,” she said. (Reporting by Steve Holland; Editing by Ken Wills)

Child in Pakistan being given the oral polio vaccine at the border. Photo courtesy of Dawn.com.

In 2015, The Guardian reported that 471 parents were jailed in Pakistan for refusing to give their children the oral polio vaccine.

I covered the story back then, and wrote:

Just to emphasize the point here, these are parents of children who are being rounded up and thrown into jail in Pakistan. Not terrorists, not murders, not thieves, but parents who do not want their children to receive the polio vaccine.

As can be seen in the photo above, the oral polio vaccine is being given right on the street, and not in a clinic. How many times were these children forced to receive this vaccine? How would the health worker even know the vaccine history of these children? Do they have pre-existing conditions that would make the vaccine a risk to harm them?

It would seem such basic health questions could not be answered when the order is to vaccinate every child by force right on the street, with no objections allowed.

The oral polio vaccine is so dangerous that it is no longer used in developed countries like the U.S. But, it is mandated, purchased, and distributed in poor countries.

The real tragedy with the live oral polio vaccines is that they can cause the very thing they are supposed to be preventing: polio.

Both “vaccine-associated paralytic poliomyelitis” and “non-polio acute flaccid paralysis” are known side effects of the live oral polio vaccine.

It sheds the virus from the vaccine through feces and into sewers and sanitation systems.

Children Around the World Vaccinated at Gunpoint – Is the U.S. Heading in the Same Direction?

Even though the oral polio vaccine was banned in the U.S. many years ago, they still continued to deny that the vaccine was dangerous as it was distributed to poor countries.

But in 2019, in an almost unprecedented admission of vaccine failure in the corporate media, National Public Radio (NPR) published a show explaining how the present-day oral polio vaccine is a failure, and is actually contributing to the rise of polio in poor countries.

They reported that the U.S. CDC is now recognizing that there is a problem with the oral polio vaccine, which as a live-virus vaccine is actually causing polio around the world, a fact reported here at Health Impact News for over 8 years now.

And the Pakistanis knew it all along.

Why Would Pakistanis Want an Experimental COVID “Vaccine”?

So here we are once again here in 2021, and the Pakistanis are yet again being vilified for being skeptical of western vaccines, and this time the experimental COVID “vaccines.”

Don’t let the title fool you, however, that this is a pro-Pakistan piece.

The author, Zuha Siddiqui, makes it quite clear that the stereotypes of the “ignorant, religious fanatic anti-vaccine Pakistanis” are alive and well in this pro-vaccine piece, as he relates his encounter with a hospital employee at the beginning of the article.

When asked if he plans to participate in Pakistan’s coronavirus vaccine rollout, Qasim Gul laughs flippantly. Gul, 32, is a clerk at a teaching hospital in Pakistan’s southeastern city of Karachi. Over the past 10 months, he has been in close proximity with several coronavirus patients, and yet, he says, the virus is a hoax.

While speaking with me outside of his hospital, Gul drags his surgical mask down to his chin. I balk and ask him to cover his nose and mouth; he tells me to seek faith in God.

“Yeah, those stupid anti-vaxxer religious fanatics, what do they know. They’re a threat to public health.”

Will the Americans’ resistance be so strong that the military will need to be used to administer vaccines at gunpoint, by force, as has been done in Pakistan these past many years?

Judging but what we have seen so far, I doubt it.

But there is day still coming, and it will probably be soon, where words will be meaningless, and actions will mean everything.

I know your deeds. See, I have placed before you an open door that no one can shut.

I know that you have little strength, yet you have kept my word and have not denied my name.

I will make those who are of the synagogue of Satan, who claim to be Jews though they are not, but are liars—I will make them come and fall down at your feet and acknowledge that I have loved you.

Since you have kept my command to endure patiently, I will also keep you from the hour of trial that is going to come upon the whole world to test those who live on the earth.

I am coming soon. Hold on to what you have, so that no one will take your crown. (Revelation 3:8-11)