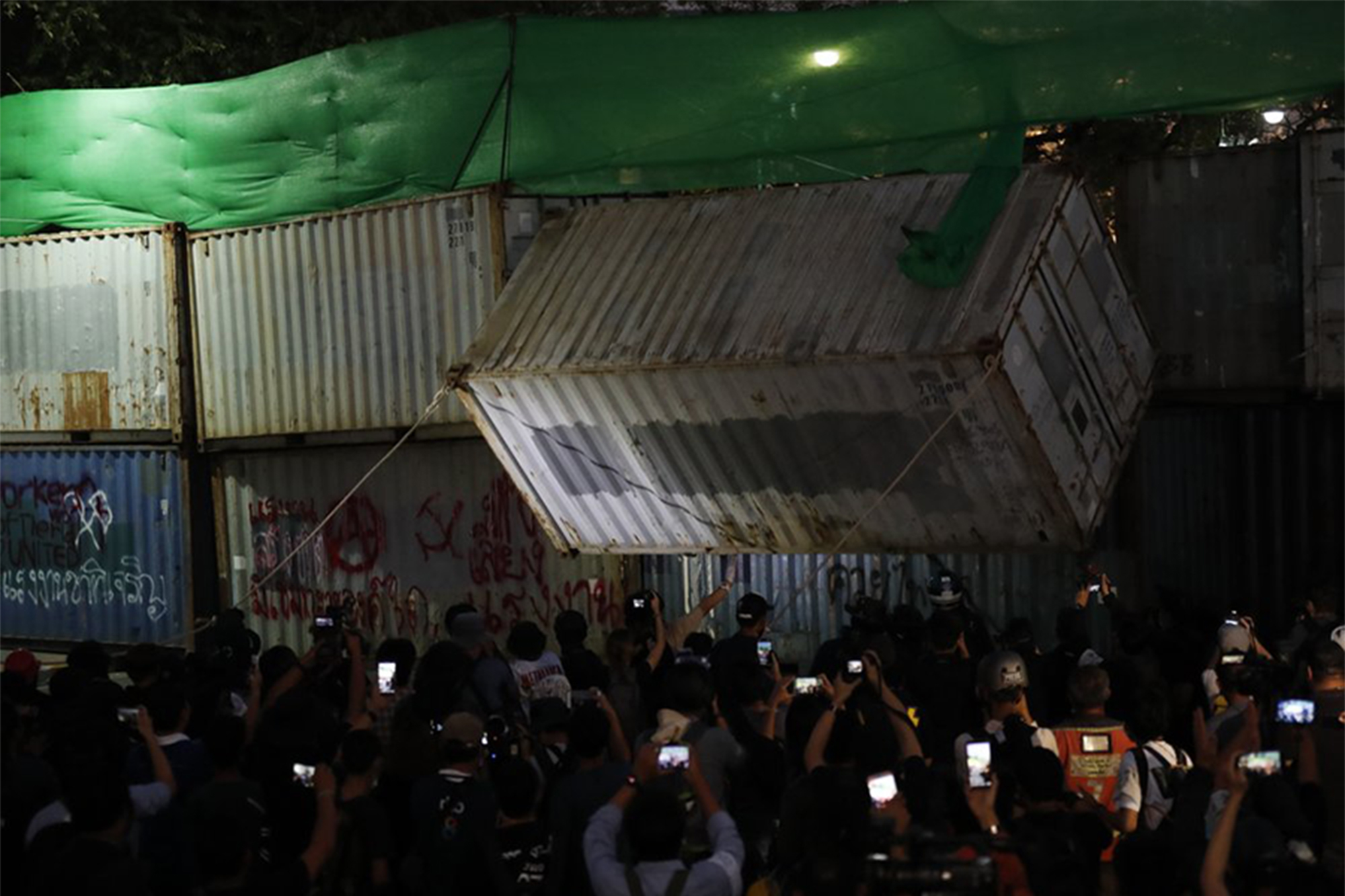 BANGKOK — Scores of people were injured and arrested in the Thai capital after police used water cannons, tear gas and rubber bullets Saturday night to break up a rally by pro-democracy protesters calling for the release of detained activists, constitutional changes and reform of the nation’s monarchy.

The rally outside Bangkok’s Grand Palace was a continuation of student-led protests that began last year and have rattled Thailand’s traditional establishment, which is fiercely opposed to change, especially with regard to the monarchy.

The rally organizers had said they planned to have demonstrators throw paper planes with messages over the palace walls.

The demonstrators, who numbered close to 1,000, managed to break through a barrier made of shipping containers outside the ceremonial palace stacked two high. Police behind the containers responded first with warnings and then by shooting water cannons and rubber bullets. Police drove the crowd back and while skirmishes continued, the crowds appeared to have dissipated by 10 p.m.

During the skirmishes, protesters tossed smoke bombs and giant firecrackers at police, and also splashed a royal portrait with paint, but failed in an attempt to set it on fire, though they did burn tires and trash at several locations.

Police Deputy Spokesman Col. Kissana Phathanacharoen said police had warned in advance that the rally was illegal. He said in addition to throwing various objects, protesters used slingshots to fire nuts and bolts at police and hit them with metal rods. He said police had used water cannons, tear gas and rubber bullets according to proper procedures.

The rally was called by REDEM, a faction of a broader protest movement last year that started with three core demands: the resignation of Prime Minister Prayuth Chan-ocha and his government, for the constitution to be amended to make it more democratic and the monarchy to be reformed to make it more accountable.

REDEM, which stands for Restart Democracy, claims to have no leaders and holds online voting to decide on rally dates and activities.

The movement sharpened its campaign to focus on the monarchy, and Thailand’s lese majeste law, which makes criticizing, insulting or defaming the king and some other senior royals punishable by up to 15 years in prison.

The monarchy has long been treated as a sacred institution in Thailand and public criticism is not only illegal but has long been considered socially unacceptable. Many people still revere the monarchy and the military, a major power in Thai society, considers defense of the monarchy as a key priority.

As protesters last year stepped up criticism of the monarchy, the government responded by charging outspoken protesters under the lese majeste law, and over the last month, eight of them were jailed pending trial.

The movement was able to attract crowds of as many as 20,000-30,000 people in Bangkok in 2020 and had followings in major cities and universities. However, a new coronavirus outbreak late last year caused it to temporarily suspend activities, and it lost momentum.