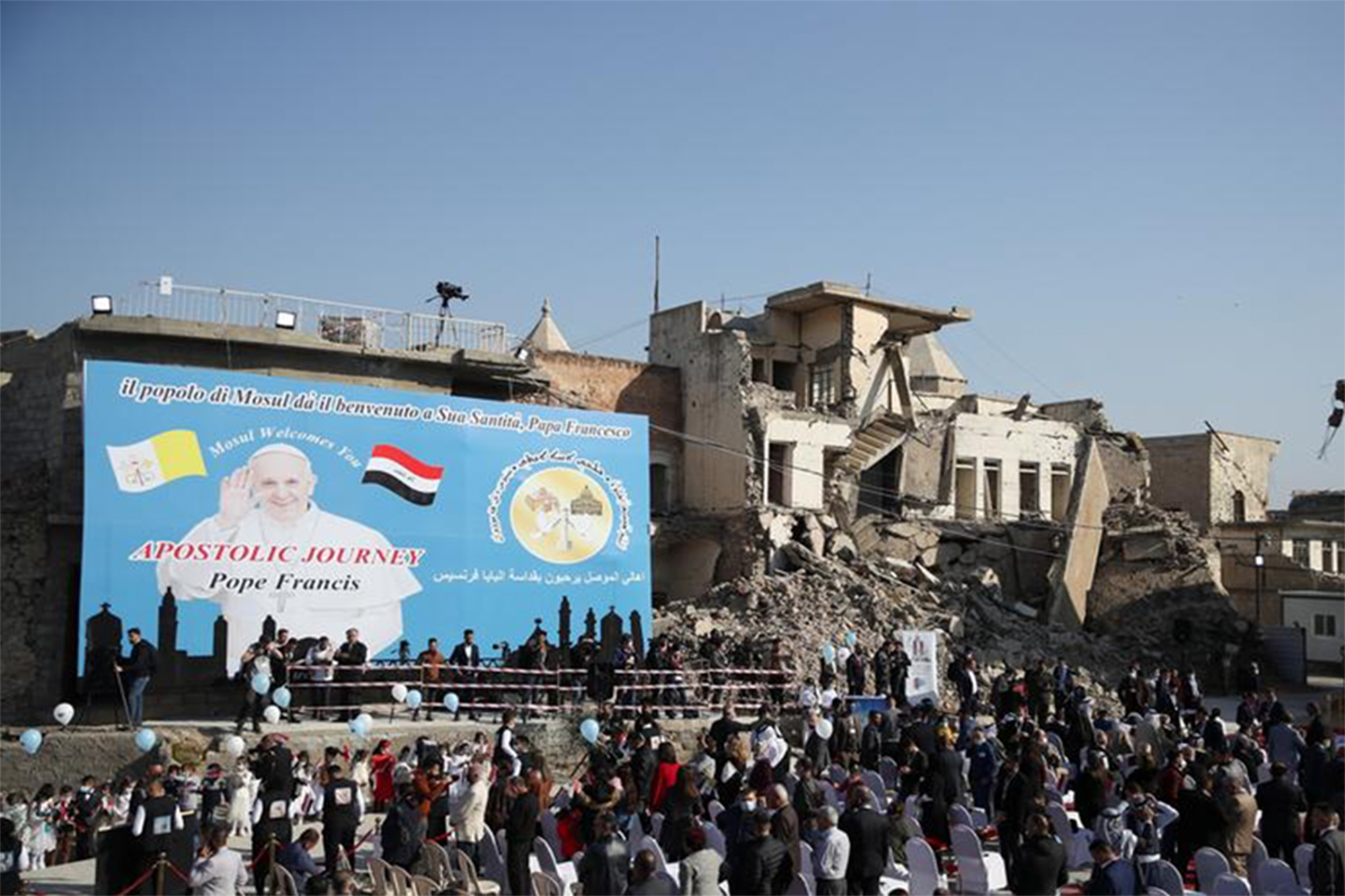 MOSUL, Iraq – Muslim and Christian residents of Mosul told Pope Francis of their lives under the brutal rule of Islamic State on Sunday as the pontiff blessed their vow to rise up from ashes, telling them that “fraternity is more durable than fratricide.”

Francis, on a historic trip to Iraq, flew into the Mosul by helicopter to encourage the binding of sectarian wounds and to pray for the dead of any religion.

The 84-year-old pope walked past ruins of houses and churches to a square that was once the thriving centre of the old town. The northern city was occupied by Islamic State from 2014 to 2017.

“Together we say no to fundamentalism. No to sectarianism and no to corruption,” the Chaldean archbishop of Mosul, Najeeb Michaeel, told the pope. Francis sat on a white chair surrounded by skeletons of buildings and dangling staircases.

Mosul’s Old City is home to ancient churches and mosques that were destroyed in 2017 during the bloody battle by Iraqi forces and an international military coalition to drive out Islamic State.

Corruption and infighting among Iraqi politicians still slow efforts to rebuild Mosul and large parts of the city remain in ruins.

The pope, visibly moved by the devastation around him, prayed for all of Mosul’s dead.

“How cruel it is that this country, the cradle of civilization, should have been afflicted by so barbarous a blow, with ancient places of worship destroyed and many thousands of people – Muslims, Christians, Yazidis and others – forcibly displaced or killed,” he said.

In an apparent direct reference to Islamic State, he said hope could never be “silenced by the blood spilled by those who pervert the name of God to pursue paths of destruction.”

He then read a prayer repeating one of the main themes of his trip, the first by a pope to Iraq, that it is always wrong to hate, kill or wage war in God’s name.

Fighters of Islamic State, a Sunni militant group that tried to establish a caliphate across the region, ravaged northern Iraq from 2014-2017, killing Christians as well as Muslims who opposed them.

Iraq’s Christian community, one of the oldest in the world, has been particularly devastated by the years of conflict, falling to about 300,000 from about 1.5 million before the U.S. invasion of 2003 and the brutal Islamist militant violence that followed.

Father Raid Adel Kallo, pastor of the destroyed Church of the Annunciation, told how in 2014 he left with 500 Christian families and how fewer than 70 families are present now.

“The majority have emigrated and are afraid to return,” he said.

“But I live here, with two million Muslims who call me father and I am living my mission with them,” he added, telling the pope of a committee of Mosul families who promote peaceful coexistence among Muslims and Christians.

The pope, blanketed in intense security on his trip to Iraq, has stressed religious tolerance.

On Saturday he held a historic meeting with Iraq’s top Shi’ite cleric and visited the birthplace of the Prophet Abraham, condemning violence in the name of God as “the greatest blasphemy”.