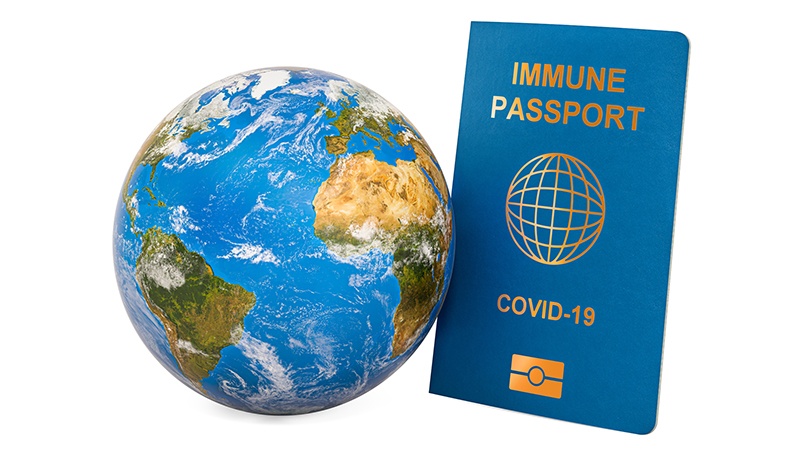 ‘The most significant vaccination effort in history’

A coalition of big tech companies, including Microsoft is developing a COVID passport, with the expectation that a digital document linked to vaccination status will be required to travel and get access to basic services.

The group is calling itself the Vaccination Credential Initiative (VCI), and includes Microsoft, Salesforce and Oracle.

The US health provider Mayo Clinic is also involved in the project, which is being described as “the most significant vaccination effort in the history of the United States.”

The idea is now a familiar one. Anyone who has been vaccinated will receive a QR code that can be stored on their mobile phone in the wallet app. Those without phones will have access to a printed version.

We have previously reported on the development of this so called ‘CommonPass’, which also has backing from the World Economic Forum, and now more details have emerged.

“The goal of the Vaccination Credential Initiative is to empower individuals with digital access to their vaccination records,” said Paul Meyer, CEO of non-profit The Commons Project, also involved in the project.

Meyer said that the document will allow people “to safely return to travel, work, school, and life, while protecting their data privacy.”

Meyer said the coalition is working with several governments, and expects standards to be adopted that will see mandatory negative tests or proof of vaccination, in order to re-engage in society.

“Individuals are going to need to have to produce vaccination records for a lot of aspects of getting back to life as normal,” he added. “We live in a globally connected world. We used to anyway — and we hope to again.”

The Financial Times reports that The Commons Project has received funding for the project from the Rockefeller Foundation, and that it is being implemented by all three major airline alliances.

The Rockefeller Foundation has previously touted its plans for a ‘Covid-19 data and commons digital platform’ as well as a desire to “launch a Covid Community Healthcare Corps for testing and contact tracing.”

“Coordination of such a massive program should be treated as a wartime effort,” the foundation states on its website, adding that there should be “a public/private bipartisan Pandemic Testing Board established to assist and serve as a bridge between local, state, and federal officials with the logistical, investment and political challenges this operation will inevitably face.”

The group also wants to see a global standardisation of the so called vaccine passports, noting that “The current vaccination record system does not readily support convenient access, control and sharing of verifiable vaccination records.”

The coalition of big tech firms is looking to “customize all aspects of the vaccination management lifecycle and integrate closely with other coalition members’ offerings, which will help us all get back to public life,” said Bill Patterson, an executive vice president at Salesforce.

“With a single platform to help deliver safe and continuous operations and deepen trust with customers and employees, this coalition will be crucial to support public health and wellbeing,” Patterson claimed.

Mike Sicilia, executive vice president of Oracle’s Global Business Units added that “This process needs to be as easy online banking. We are committed to working collectively with the technology and medical communities, as well as global governments.”

Ken Mayer, founder and CEO of Safe Health also stated that the VCI “will enable application developers to create privacy-preserving health status verification solutions that can be seamlessly integrated into existing ticketing workflows.”

The context seems clear. Those without the COVID passport will not be allowed to travel or engage in social events.

Hundreds of Tech companies are scrambling over themselves to develop COVID passport systems.

As we reported last month, the IATA, the world’s largest air transport lobby group, expects its COVID travel pass app to be fully rolled out in the first months of 2021.

We have exhaustively documented the privacy and rights concerns associated with the move toward adoption, and more importantly the global standardisation of so called COVID passports.

UK based human rights group Privacy International has warned that if “immunity” passports are issued by some governments, it could signal a creep toward “digital identity schemes” and other mandatory ID schemes.

“Once you have multiple uses (e.g. access to services) in multiple domains (i.e. public sector, private sector), in multiple countries (i.e. travel), then we are approaching a global identity document needed to live your life,” the group warned.

Sweden based human rights group The International Institute for Democracy and Electoral Assistance (IDEA) warned recently that 61 per cent of countries have used COVID restrictions “that were concerning from a democracy and human rights perspective.”

Anna Beduschi, an academic from Exeter University, commented on the potential move toward vaccine passports by EU, noting that it “poses essential questions for the protection of data privacy and human rights.”

Beduschi added that the vaccine passports may “create a new distinction between individuals based on their health status, which can then be used to determine the degree of freedoms and rights they may enjoy.”

The EU’s own data protection chief Wojciech Wiewiórowski recently labeled the idea of an immunity passport “extreme” and has repeatedly said it is alarming, and ‘disgusting’.

Sam Grant, campaign manager at the civili liberties advocacy group Liberty has warned that “any form of immunity passport risks creating a two-tier system in which some of us have access to freedoms and support while others are shut out.”

“These systems could result in people who don’t have immunity potentially being blocked from essential public services, work or housing – with the most marginalised among us hardest hit,” Grant further warned.

“This has wider implications too because any form of immunity passport could pave the way for a full ID system – an idea which has repeatedly been rejected as incompatible with building a rights-respecting society,” Grant further urged.

Gloria Guevara, CEO of the World Travel and Tourism Council (WTTC), has also slammed the passports as “discriminatory”, saying “We should never require the vaccination to get a job or to travel.”

Speaking at a Reuters event, the head of the WTTC also condemned airline Qantas for their previous assertion that unvaccinated people would not be allowed on their aircraft.

“It will take a significant amount of time to vaccinate the global population, particularly those in less advanced countries, or in different age groups, therefore we should not discriminate against those who wish to travel but have not been vaccinated,” Guevara noted.

Nevertheless, the spectre of so called ‘immunity passports’ is looming globally.

As noted above, Greek Prime Minister Kyriakos Mitsotakis has penned a letter to EU Commission chief Ursula von der Leyen, demanding that the Commission should ‘standardise’ a vaccine passport across all member countries, and that it should be required for people to travel throughout the area, further outlining that “Persons who have been vaccinated should be free to travel.”

The request is set to be debated in the coming days.

Vaccine passports have previously been touted by the EU, with officials suggesting back in April that visa applicants would also be required to be vaccinated.

EU countries including Spain, Estonia, Iceland, and Belgium have all indicated that they are open to some form of vaccine passports, as well as sharing the data across borders.

Denmark recently announced that it is rolling out a ‘Covid passport’, to allow those who have taken the vaccine to engage in society without any restrictions.

Poland has also announced plans to introduce vaccine passports, which will allow those who have taken the COVID shot greater freedoms than those who have not.

Having left the EU, Britain would not be part of any standardised European scheme, however it has now confirmed that it is rolling out vaccine passports, despite previous denials that it would do so.

Recently, the government in Ontario, Canada admitted that it is exploring ‘immunity passports’ in conjunction with restrictions on travel and access to social venues for the unvaccinated.

Last month, Israel announced that citizens who get the COVID-19 vaccine will be given ‘green passports’ that will enable them to attend venues and eat at restaurants.

A litany of other government and travel industry figures in both the US, Britain and beyond have suggested that ‘COVID passports’ are coming in order for ‘life to get back to normal’.

In addition, hotels have also indicated they will do the same.

Insurers have also indicated that they will fall in line with any standardisation of vaccination passports, and may demand to see proof of vaccination before covering those wishing to go on holiday.

The international Travel and Health Insurance Journal reported that “If the EU obliges travellers to vaccinate, travel insurance providers may refuse to cover those who decline to have the vaccination.”

EU news website Schengenvisainfo also reported on the likely move by insurers, pointing out that anti-vaxxers will likely be specifically targeted by the mandates.

“Even if anti-vax travellers find a loophole in the requirement and manage to enter any of the Member States, travel insurance providers may refuse to cover them,” the report states.

It continues, “With the high volume of fake news and conspiracy theories that have been going on for months now on the pandemic and vaccination, the real challenge for the EU will not be to purchase the necessary vaccine doses, but rather to convince people to be vaccinated.”

The report adds that “Conspiracy theorists, in Europe and further in the world, have targeted Microsoft founder Bill Gates, who is known as a supporter of vaccination, claiming he is responsible for the Coronavirus pandemic.”

While surveys have indicated that around half the people in the world are not willing to take the vaccine at this stage. However, a recent poll has indicated that 74% of Americans say they are willing to get a COVID vaccination passport, should they be introduced in the U.S.

Read the full article at Summit.News.

The New mRNA COVID Vaccines Inject an Operating System into Your Body – Not a Conspiracy Theory, Moderna Admits It