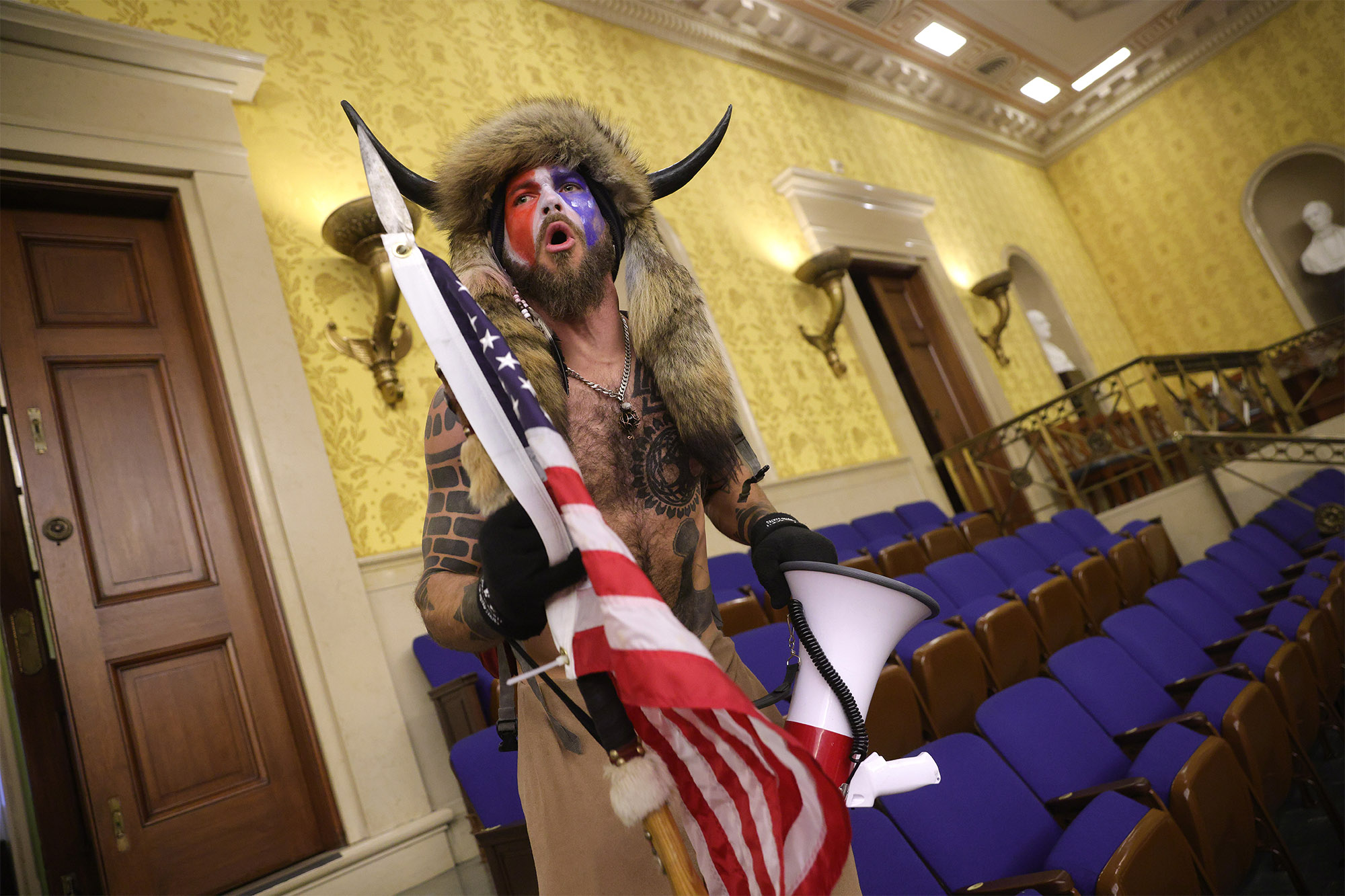 The bare-chested, face-painted man who stormed the US Capitol wearing a furry horned hat and wielding a 6-foot long spear is refusing to eat in federal custody — unless he is supplied with organic food, his mom said.

Jake Angeli, 33, turned himself into FBI agents in Arizona on Saturday in connection with his viral role in Wednesday’s Capitol Hill uprising.

Angeli — who faces charges of disorderly conduct, violent entry and illegally being on restricted spaces within the Capitol grounds — has not eaten since then, his lawyer told a virtual federal court hearing on Monday, according to The Arizona Republic.

The Q-Anon supporter’s mom, Martha Chansley, later explained outside the courthouse that her son insists on only eating organic food.

“He gets very sick if he doesn’t eat organic food,” she said, according to the newspaper. “He needs to eat.”

“Mr. Chansley needs to eat,” she said using Angeli’s legal name. He changed it to Jacob Anthony Angeli Chansley in 2005.

The judge ordered him to be held in Phoenix while awaiting charges in Washington, D.C. until at least Jan. 15, the paper reported.

If found guilty, he could be locked up for “years and years,” the US Marshal for Phoenix, David Gonzalez, told the Arizona Republic.

The suspect and his trademark Viking costume have long been fixtures at right-wing protests and marches in the Phoenix area, the paper reports.

As deadly violence unfolded around him during the riot, Angeli was photographed posing for pictures at the dais in the US Senate chamber — flexing his biceps in one arm while brandishing his American flag-adorned spear in the other.

In an interview last Thursday, Angeli denied committing any crimes.

Angeli — who previously expressed doubts to The Arizona Republic that the coronavirus pandemic is “real” — was to-the-point at his virtual hearing.

When asked if he could afford a lawyer, he said he could not, but he expected that to change.

“Provided I am able to get hold of a certain friend of mine, I was told I could have a lawyer from him,” Angeli said, according to the paper.

Angeli allegedly told the FBI he was compelled to travel 2,300 miles to Washington to answer the call from President Trump — who falsely told followers the presidential election results were fraudulent.

On Monday, the National Guard announced it would bolster the number of troops in the nation’s capitol to at least 10,000 in advance of President-elect Biden’s inauguration.