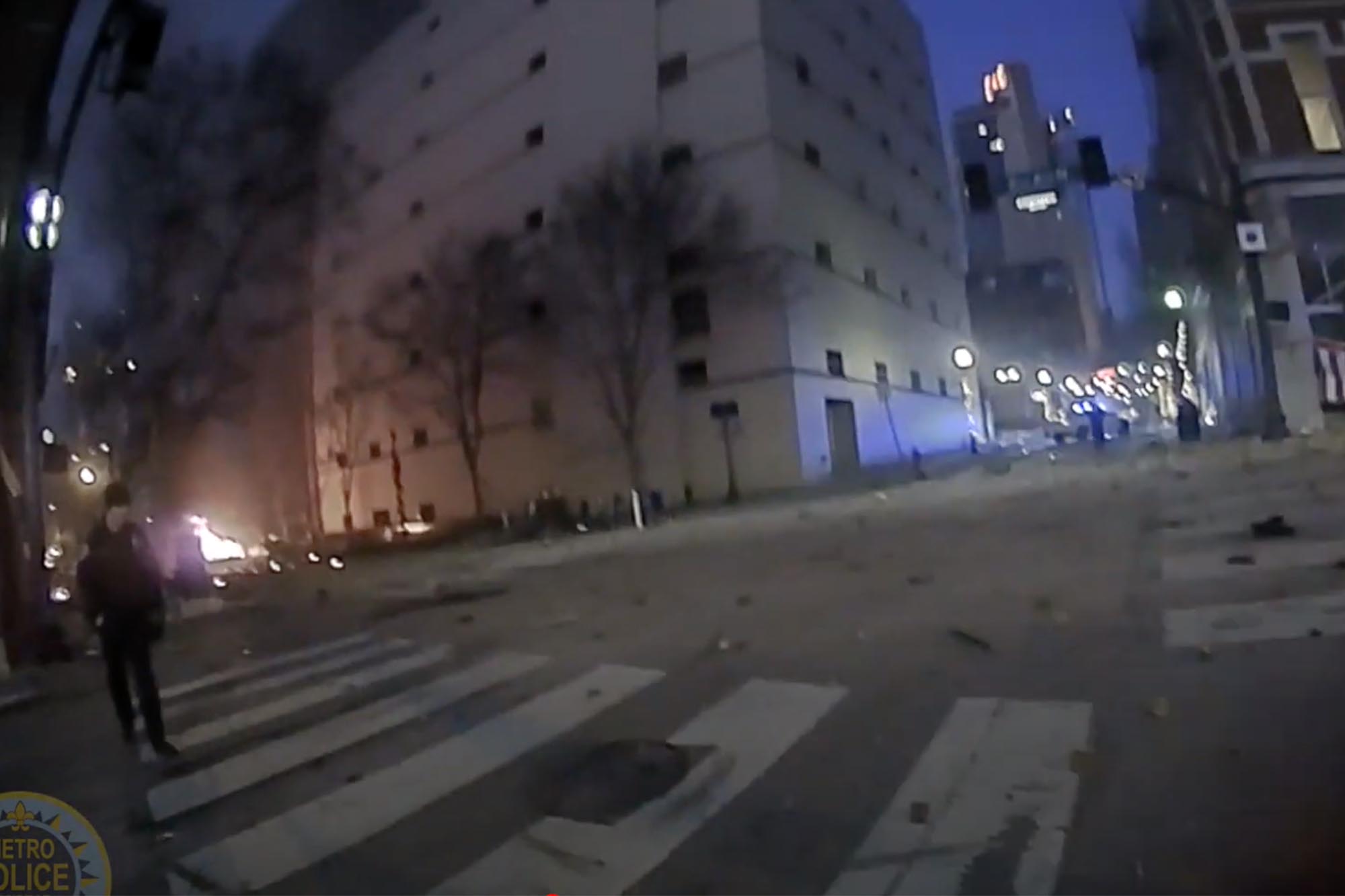 Chilling police body-camera footage released Monday captures the uneasy calm before the Nashville Christmas bombing — then the deafening blast itself and the chaos in the minutes after.

The stunning footage was recorded by the camera of Officer Michael Sipos, one of the first six cops on scene to investigate the suspicious RV that blared an audio warning to evacuate around 6:30 a.m. Christmas morning.

The nearly 13-minute video opens with Sipos and his fellow cops urging area residents to clear out — as the RV’s own ominous message echoes up and down a mostly deserted Second Avenue.

“Your primary objective is to evacuate these buildings now,” a woman’s voice can be heard saying on the automated recording emanating from the RV. “Do not approach this vehicle.”

The cops can be heard commenting on the unnerving scene.

“That’s so weird,” said Sipos. “That’s like something out of a movie.”

“Like ‘The Purge?’” another cop can be heard asking, referring to the dystopian horror series.

Eerily undercutting the tension, Brenda Lee’s “Rockin’ Around the Christmas Tree” can be heard playing on the speaker of a closed storefront as the cops walk by.

Passing the RV, one lawman noted that the vehicle sat right outside a key AT&T building.

“That building that it’s next to is the building that houses all the hardlines for phones throughout the southeast,” the officer said.

“Makes sense,” replied another. “Good spot to put a bomb.”

Investigators have since theorized that the suicide bomber, Anthony Quinn Warner, may have targeted the building with the intent of crippling service, possibly due to a paranoid fear of 5G cellular technology and surveillance.

Sipos eventually turned off Second Avenue, heading back to his marked car.

Just seconds after Sipos threw open the trunk, the thunderous explosion can be heard in the distance, followed by a cacophony of car alarms.

Sipos calmly donned a protective vest, closed the trunk and headed back toward Second Avenue, the path back now littered with shards of broken glass and other shrapnel.

He returned to Second Avenue in time for his camera to capture the RV in flames, and a handful of shaken locals emerged from buildings, asking questions for which the cops had no answers.

Intermittent bangs could be heard in the minutes following the larger blast, which one officer warned could be ammunition inside the RV exploding in the heat.

“We’re hearing secondaries. It could be ammunition inside the vehicle,” one cop could be heard saying over police radio. “Do not get in the open. Do not get out in the open on Second Avenue.”

As medics and firefighters flooded the scene, so too did more curious onlookers asking what happened.

“Dude, trust me, go that way,” Sipos directed one civilian, gesturing away from the scene of the blast.

The explosion killed Warner, wounded three other people and caused massive collateral damage, including to phone service throughout Tennessee and the south.

Investigators have said that the 63-year-old IT expert appears to have acted alone.